Andrew Rucks, a junior from Valley View High School, has been nominated December Student of the Month by his Cyber Security Instructor, Tom Czachor. “Normally, Andrew would only get two of the three years of the course, but at the rate, he is progressing, he will definitely complete 2+ years. Andrew is working ahead of the class and has been since he entered CTC just this past fall. When he first started the course, he asked if he could work ahead. He was told yes, as long as he understood the material, not just to get it done. His assignments are completed on time, often early. He has the drive and determination to succeed and move forward, even while we are virtual. Andrew has not had a grade under 95 on a test, so he has been able to progress at his own pace.  He was the first in his class to obtain his TestOut IT Fundamentals Pro and CompTIA IT Fundamentals Certifications", stated Tom Czachor, Cyber Security Instructor.

Andrew has maintained an A average since beginning at the Career Technology Center.

Andrew plans to enter a computer-related field after graduation. 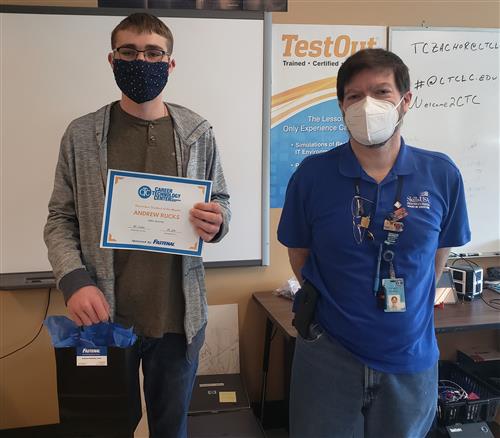