Riley Panek, a senior from North Pocono High School, has been nominated February Student of the Month by his Automotive Instructor, Bryan Peck. “Riley continues to amaze me. No matter the project or problem facing him, he always focuses and does not give up until it is completely correct", stated Bryan Peck, Automotive Instructor. Riley is a two-time SkillsUSA competitor and recently won a Gold medal at the district competition. Riley has received his OSHA10, ASE 609, SNAP-ON multimeter, and Valvoline certifications. He also obtained multiple FORD Motor Company certifications.

Riley has almost perfect attendance since beginning at the Career Technology Center. He has only missed 6 days over his three years and has never missed an assignment according to Mr. Peck. He has maintained an A average since a sophomore year. Riley will be inducted into the National Technical Honor Society, next month, and will compete at the virtual SkillsUSA State competition for Automotive Service Technology.

When he's not working on his classwork, Riley is a laborer at Kobalt Construction and snow plows for Cinemark. Riley enjoys riding ATVs & dirt bikes.

Riley plans to join Kobalt Construction, after graduation, as a Machine Operator. 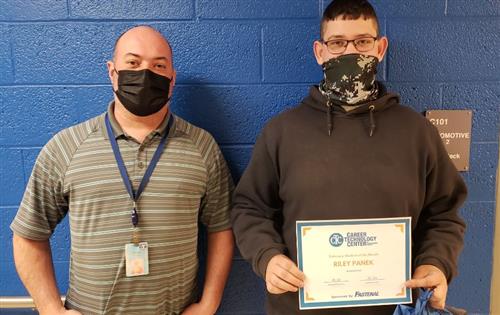