April Student of the Month Sponsored by Fastenal

April Student of the Month: Sponsored by Fastenal

Quenten Bovee, a senior from Lakeland High School, has been nominated April Student of the Month by his Computer Networking Infrastructure Instructor, Mr. John Moran. “Quenten is a role model student in the Computer Networking Infrastructure program at CTCLC and all of his academia. His passion for learning and critical thinking drives his unyielding craving towards acquiring the skills needed to pursue a career in Computer Networking. This pandemic has not slowed down Quenten’s ability to indulge his vast appetite with the curriculum and surpass expectations”, stated Mr. Moran.

He has competed at SkillsUSA in both his senior and junior years. This year he placed first at the district level and state-level for Internetworking. He will now go on to the National SkillsUSA competition and represent Pennsylvania. During his time at CTCLC, Quenten has earned 9 credits through dual enrollment with Keystone College and has obtained his TestOut PC Pro certification, Network Pro, Routing, and Switching Pro.  Along with his CompTIA IT Fundamentals and A+ 1001.

At Lakeland high school, Quenten is team captain & organization owner of the school's gaming club. He also is a member of the marching band and chess club. At CTCLC, Quenten has maintained an A average over his three years in the CNI program and was recently inducted into the National Technical Honor Society.

Upon graduation, Quenten will be attending Keystone College and concentrating in Information Technology with a specialization in Networking. 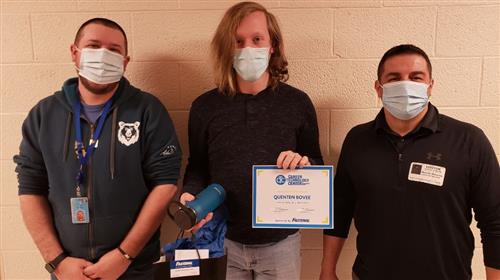