June Student of the Month Sponsored by Fastenal

June Student of the Month: Sponsored by Fastenal

Ashley Dulski, a junior from Forest City Regional High School, has been nominated June Student of the Month by her Culinary Instructor, Mr. Mark McAndrew. “During COVID and even before, Ashley is always the first student to complete assignments and assessments. Ashley consistently maintained attendance during the back and forth from virtual to hybrid models of education. This year, Ashley received 100% for the Culinary OSHA certification on her first try. She has either won or placed with our culinary competitions this year.”, stated Mr. McAndrew.

Ashley will forgo her senior year, as she has been accepted for the early enrollment program at Johnson and Wales University. She will begin in Fall2021 with a $19,500 scholarship.

During her time at CTCLC, Ashley has maintained an A average in the Culinary program. She has been involved in all of Culinary II’s service projects, including the Dog Treat project for True Friends Animal Welfare Center. She has also obtained her ServSafe certification.

In her spare time, Ashley likes to read and create short stories; one has even been published. She also works at a local restaurant. 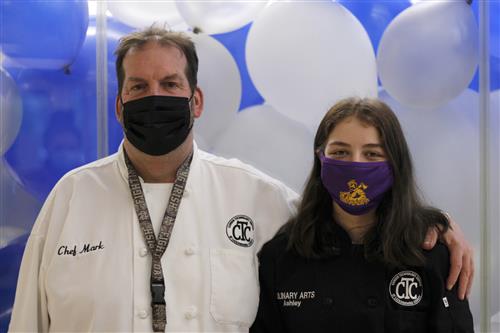