December Students of the Month: Sponsored by Fastenal

Hector Ortiz, a senior from Scranton High School, has been nominated December Student of the Month by his Culinary Instructor, Mr. Mark McAndrew. “Hector is my best student and has been featured in School Notes, competed in SkillsUSA, and is the first to step up all of our community service projects. He leads his peers on a daily basis”, stated Mr. McAndrew.  While in the Culinary program, Hector obtained his OSHA10 and ServSafe Food Handlers Certification.

Hector is the son of Milka Lopez and Omar Padilla. Hector strives to maintain high grades at CTC & Scranton, maintaining a 3.6 GPA and being on the Honor Roll. “I came to CTC to follow my passion for culinary arts”, stated Hector. At Scranton, Hector is a member of the Varsity Football and Track & Field teams. At the CTC, Hector is a SkillsUSA competitor and is currently in the process of getting everything together to head out in the industry through Co-Op. Hector is heavily involved in community service efforts with Friends of the Poor, Cookies for Kids Cancer, Annual First Responders Luncheon, and is a youth ministry volunteer with his church.

Upon graduation, Hector plans to continue his education at the Culinary Institute of America to receive his Associate's Degree. 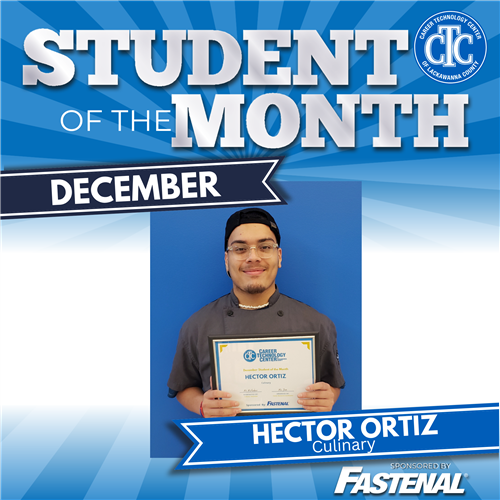 Gaia is the daughter of Lee and Marzia Caporale. At Abington, Gaia is a member of the school’s choir. “I chose to attend CTC for a good vocational program”, stated Gaia. In her spare time, Gaia is involved with tap dance and theatre. She is currently working in a Co-Op with the CTCLC’s Cafeteria staff.

Upon graduation, Gaia will spend the year in Italy. After she will look for a job where she can put her talents into practice. 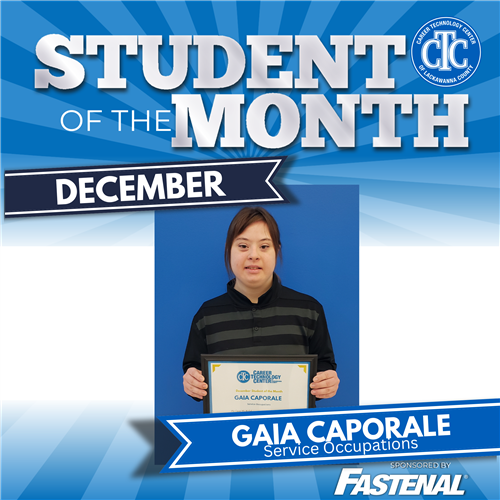 Nicholas Bonham, a senior from Forest City Regional High School, has been nominated December Student of the Month by his Electrical Instructor, Mr. Robert Letteri. “Nick is a true servant and leader. He quietly leads and is a positive role model. The evidence is found in his compassion for others, his willingness to learn new things, and his courage to overcome obstacles. Specifically, he builds others up, volunteers to do any task with a cheerful attitude, and is willing to learn new tasks without prompting. It is an honor to teach Nick”, stated Mr. Letteri. While in the Electrical program, Nick completed his OSHA10, OSHA30, and several certifications for the American Ladder Safety certification. He is looking to partake in a Co-Op placement this year.

Nicholas is the son of Carrie and Frank Bonham. At Forest City Regional, he is a member of the 4H club, ski club, and volleyball team. At CTC, Nick does odd electrical jobs around the school. He was involved in SkillsUSA last year where he earned a silver medal and the district competition in Electrical Construction. “I chose to attend CTC because I have always loved working with my hands and I enjoy learning new things and overcoming challenges”, stated Nicholas.

Nick works daily at his family farm and Bonham excavating and is a volunteer firefighter. In his spare time, he enjoys racing street-stock cars at Penn-Can Raceway.

Upon graduation, Nick plans to join the Union as a Linesman and continue his education. 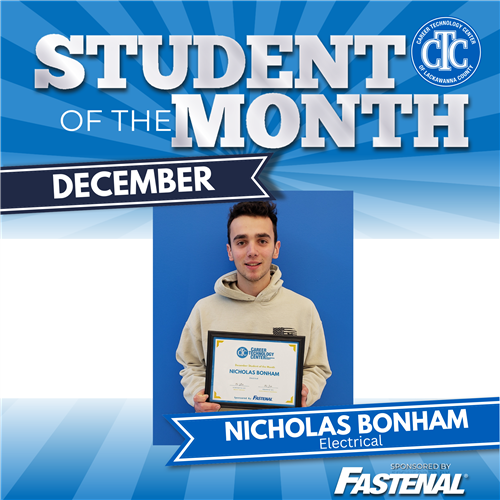