Brendan Rucks, a junior home school student in the Valley View School District, has been nominated January Student of the Month by his Automotive Instructor, Mr. Bryan Peck. “Brendan's focus and determination are an inspiration to his classmates. He is always willing to help others and continues to excel at CTC”,  stated Mr. Peck. While in the Automotive program, Brendan obtained his OSHA10, ASE 609, and Snap-on multimeter. Brendan has completed the FORD ACE program and the Toyota TECS program for the automotive industry. This has never been accomplished by any other student, especially in this short time frame. He was even recognized by Ford Corporation last year for his amazing accomplishment.

Brendan is the son of Ellen and Michael Rucks. Brendan continuously challenges himself and takes high-level math and physics classes. He states he came to CTCLC to gain hands-on learning, obtain real-life experiences, and take advantage of the Cooperative Education opportunities our students have access to.

Brendan recently placed second at the SkillsUSA district competition for Automotive. In his spare time, he volunteers with his church, plays bass guitar, plays soccer for Valley View and a club team, enjoys building scale model cars, and maintains a job at Gibbons Ford.

Although only a junior, Brendan plans to possibly pursue a degree in Automotive Engineering. 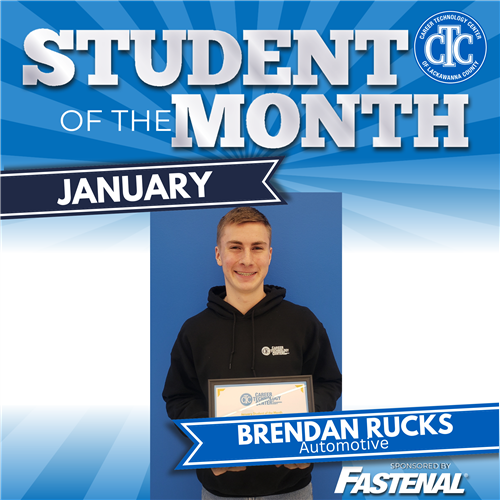 Maiya Rizner, a senior from Forest City Regional High School, has been nominated January Student of the Month by her Carpentry Instructor, Mr. Shane Malicky “Maiya exemplifies what it means to be a CTC student. She has good attendance, grades, and school spirit. Maiya has persevered as a young woman in a predominantly male trade. She strives to do her best with carpentry tasks and is always willing to give a helping hand”, stated Mr. Malicky. While in the carpentry program,  Maiya has completed 4 American Ladder Safety training certificates and the OSHA10 construction safety certificate.

Maiya is the daughter of Adrian Rizner. “ I chose CTC so I could be hands-on and one day able to build my own home”, states Maiya. At CTC, Maiya is a Student Ambassador and recently competed in the SkillsUSA district competition for Job Interview. At Forest City, Maiya participates in many activities. She is a member of the Varsity cheer squad and yearbook committee. Maiya also enjoys the outdoors, is an avid hunter and fisherman, and enjoys horseback riding and building demolition derby cars. In her spare time, she works at a local restaurant.  She also has met the requirements to be an American Red Cross Red Cord member.

Upon graduation, Maiya plans to apply for an apprenticeship position with the United Brotherhood of Carpenters and Jointers of America. 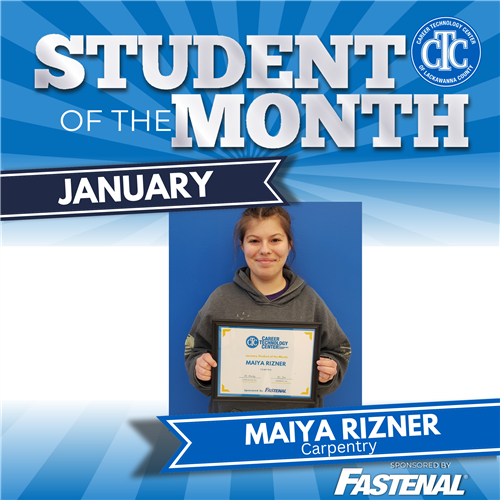 Calie Carter, a senior from Forest City Regional High School, has been nominated January Student of the Month by her Cybersecurity Instructor, Mr. Tom Czachor “Last year, Calie was a last-minute replacement to compete at SkillsUSA National competition in Cybersecurity and rose to the occasion. She has continued working hard, recently got GOLD at the SkillsUSA district competition, and will be heading to Hershey, PA in April for the State competition. She is the lead student in updating/ creating/ maintaining the digital cafeteria displays and currently trains other students in the process. She is always ahead in her work and does it with enthusiasm. Calie is always willing to lend a hand, whether it is helping a fellow classmate or working on projects”, stated Mr. Czachor. While in the Cybersecurity program, Calie has obtained her TestOut IT Fundamentals & PCPro, and CompTIA IT Fundamentals+.

Calie is the daughter of Jennifer Hawn and Henry Carter. "I chose to come to CTC to learn more about computers. I was always interested in computers and when I learned that CTC had a Cybersecurity program I knew I wanted to go to learn more and further my education", stated Calie. At Forest City Regional, she is a member of the Drama club, cheer, yearbook, and student council and is a member of the National Honor Society. Dedication to her studies helped her gain high honors. Calie recently had an internship opportunity at the school, to work hands-on with computers and gain real-life experience working in the field. She also helps with the Forest City food produce market. At CTCLC, Calie has maintained an A average.

Upon graduation, Calie plans to attend a post-secondary school and major in Computer Engineering and minor in Cybersecurity. She would like to get in with the FBI and earn security clearance. 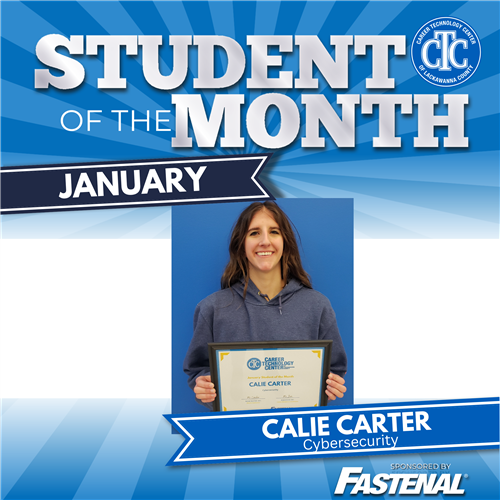