January Student of the Month

Alex Olsen, a Junior from West Scranton High School, has been nominated January Student of the Month by his Carpentry Instructor, Shane Malicky. "Since day one of his tenure at CTC in the carpentry program, Alex has strived to attain the necessary skills to become a proficient carpenter and is always willing to go out of his way to help his fellow classmates. Alex has nearly perfect attendance only missing days when his home school was excused, and even on those days, Alex tries to get to CTC”, stated Mr. Malicky

Alex is a CTCLC Student Ambassador who enjoys promoting CTC every chance he gets. He also was a big help this past fall, with the 5th-grade Career Exploration days. Alex has also helped Mr. Malicky with his OAC meetings, meeting with Industry and taking notes.

Alex is a four-year member of the West Scranton High School marching band and a six-year member of West Scranton Player’s, a drama club. All while maintaining a high average at CTCLC. Alex looks to obtain a Co-Op position next quarter. He currently works at a wholesale food outlet. In his spare time, he enjoys hiking Rickett’s Glen State Park and fishing at Ford’s Pond.

After high school, Alex plans to enter the workforce for the United States Post Office full time and work part-time for a construction company. 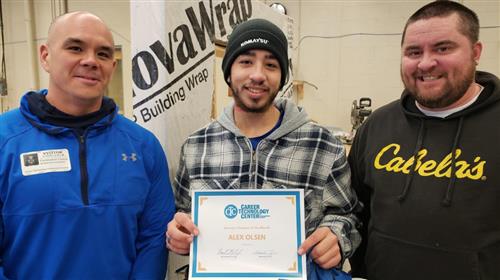