February Student of the Month

Samuel Kussi, a senior from North Pocono High School, has been nominated February Student of the Month by his Protective Services Instructor, Jonathan Coyne. ”Samuel is an individual who demonstrates great leadership. He is always observed helping his fellow classmates without expecting any time of reciprocation. Samuel is always energetic and cannot wait to discuss our topics or what has occurred in the real world with his volunteer fire department. He is always one of the first students to participate and get his fellow classmates involved in a project or classwork. When he found out about the NREMT Co-Op that was starting only a week and a half after school began, he was the first student done and completed with his packet while encouraging his other classmates to get the paperwork done.”, stated Mr. Coyne

Samuel recently completed and retained his NREMT(The National Registry of Emergency Medical Technicians). He is the newest Protective Services student to obtain it. Samuel had to complete 196 hours of class time, a practical based test, and a written portion.

He is part of the CTCLC Co-Op program with Pennsylvania Ambulance, a CTCLC Student Ambassador, a volunteer firefighter for his local Firehouse and Ambulance company, will be competing at the SkillsUSA state competition for Firefighting, NPHS Drama Club, and the NPHS Red Cross Club.

Samuel is currently working in the medical field with his NREMT Certification and may possibly join the military. 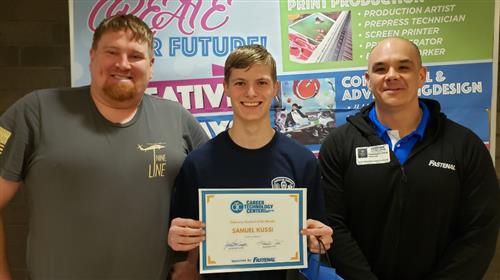